Louisiana couple Jennifer and Jessica shared their love story, trying legal drama and sweet proposal back in spring, and we’re thrilled to announce that the two have tied the knot. You can view their dreamy wedding here.

Unfortunately for the couple, there was a major last-minute heartbreak leading up to their wedding; Jessica’s underage daughter from a previous marriage was legally barred from attending the nuptials in Mexico. Jennifer and Jessica spent most of their planning process in court, fighting Jessica’s ex-husband and his family to allow their daughter to be present at the wedding in Mexico. Says Jessica, “It was always our intention for her to be there. She was the only one in our wedding party and was to be our maid-of-honor. She was present for the proposal and so excited that we were getting married. She was thrilled to plan everything with us.”

Last December the couple met the girl’s father in court for over four hours of testimony regarding the destination wedding. The judge ruled that it was in their daughter’s best interest to attend, but because Jessica’s ex had argued that their wedding was merely a ploy to disappear with their daughter, the judge requested that Jessica post a 10K security bond to ensure her daughter’s safe return. “Although we thought the bond was ludicrous, we felt that we had essentially won.”

Jessica’s ex-husband had his attorney file a writ to overturn the decision, but this was denied. The couple thought their long nightmare was over, but they still didn’t have their daughter’s passport—it takes both parents’ signatures to obtain one and the father was non-compliant. It took another few days in court to get the signature, and the passport arrived one week before the wedding. “Only days later my ex filed a writ with the Louisiana Supreme Court asking them to overturn the decision to allow my daughter to travel to Mexico for our wedding. As you can imagine, we saw this as a last ditch effort on his part, and never thought it would be granted.”

Jen and Jess were legally married with their daughter present on March 29, 2016. What should have been a day of celebration for the couple quickly turned tragic. Says Jessica, “As we walked out of the courthouse I got a call from my attorney telling me that the Supreme Court of Louisiana granted my ex’s writ, and my daughter would need to be dropped off to him that afternoon because we were leaving for Mexico the next morning.”

The couple flew to Mexico and celebrated their marriage with a beautiful wedding surrounded by family and friends. Still, they felt the loss of not having their daughter present, and have chosen to share this sorrowful part of their wedding story because for many same-sex couples, this is the unfair reality of wedding planning. Says Jessica, “I’ve struggled with it all … feeling bittersweet about our beautiful day. Despite everything Jennifer and I put all that happened aside for a week and enjoyed our wedding and honeymoon. It was truly amazing.” 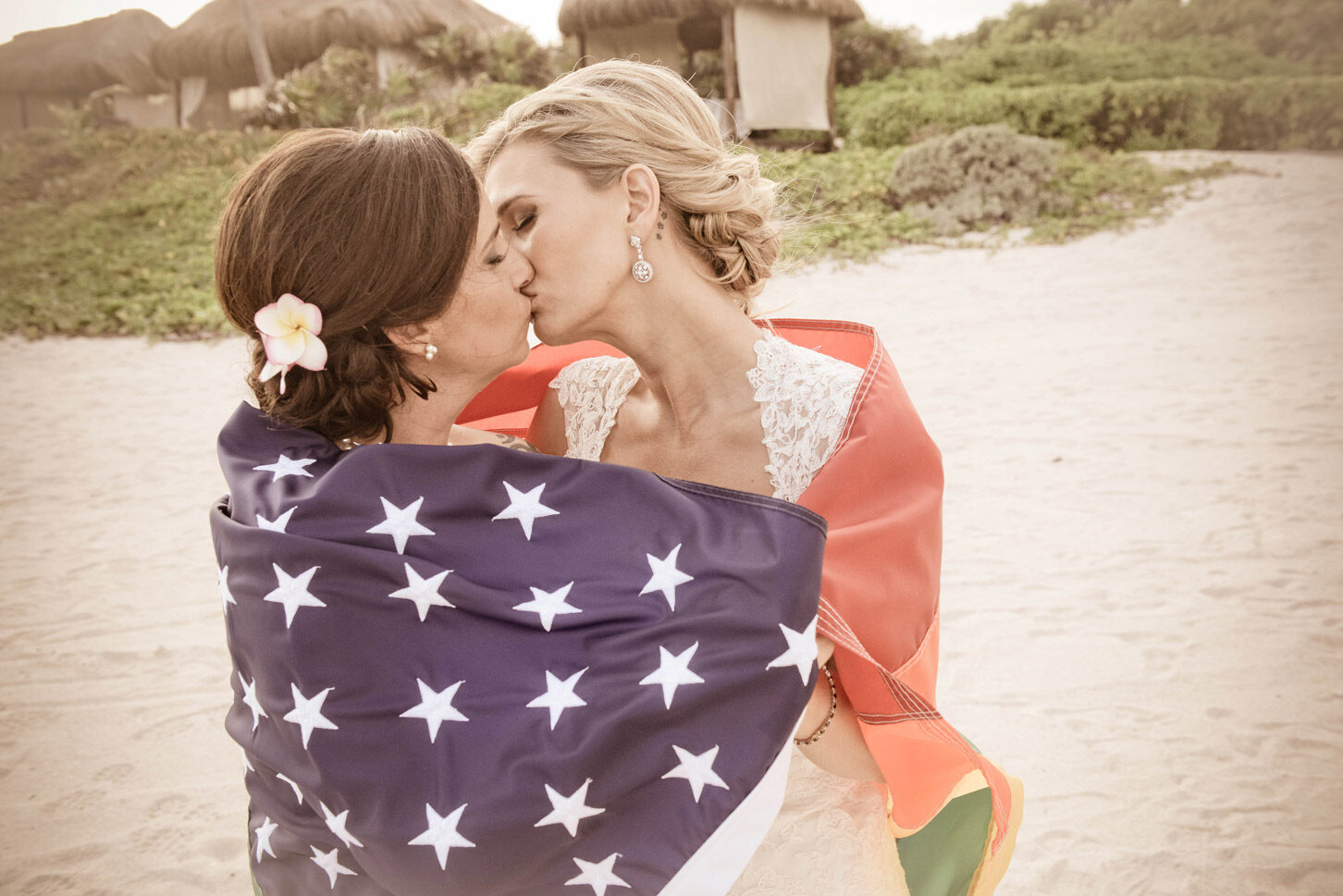 This won’t be my last post about telling our families and our elders about our wedding plans, but I’m sharing today and asking you, in turn, to share your own

Brooke and Melissa knew each other for several years before beginning a romantic relationship. Say the brides-to-be, “Life has a funny way of ensuring that you are where you are