Ashlynn & Danielle met while playing ice hockey at Adrian College in 2007, but it wasn’t until a couple of years later—June, 2009—that they began dating. The couple maintained a long distance relationship for 3 years before moving to Columbus together for Danielle to attend graduate school at The Ohio State University in the fall of 2012. They have since bought a house in Powell, OH, brought home an adorable puppy named Riley, and planned a wedding for this October.

On December 10th 2014 the couple were at the Columbus Zoo for their annual tradition of viewing the Christmas lights.

Ashlynn: We were enjoying ourselves walking around the zoo when I decided we should go back behind an exhibit that was blocked off. Little did I know that Danielle would agree to my half-joking request. She asked to take a picture of me looking at the lights, so naturally I rolled my eyes and obliged.

Danielle: After sneaking into the closed Bald Eagle exhibit—something totally out of character for me, and totally Ashlynn’s idea—I asked her to stand at the edge of the bridge looking out towards the Christmas lights so I could get a picture. Little did she know I was really pulling the ring out of my pocket and getting down on one knee.

Ashlynn: When I turned around and began walking in the other direction I saw Danielle on her knee and I stopped immediately. I was completely taken aback. I couldn’t believe she was asking me to marry her. Although I don’t remember exactly what she said to me at the time, due to shock, I was in complete bliss. I couldn’t have been happier to know that I would spend the rest of my life with the beautiful girl in front of me.

Danielle: I asked her to make me the luckiest woman in the world and marry me (and some other mushy stuff) and she said “YES!”

Ashlynn: Of course I said “yes” and I embraced her and gave her a big kiss!

The brides-to-be had engagement photos in Schiller Park in October 2015. Says their photographer Elle of Brett Loves Elle Photography, “They brought so many props and fun things to use that we were inspired and shot for way longer than the normal hour. Danielle and Ashlynn had even scoped out the location before we had arrived and knew exactly where they wanted to take photos. I have never been at a shoot that was so organized and planned out.”

Says Elle, the photographer, “My favorite “prop” had to be their adorable little puppy. Her face was just so cute and she was the softest and fluffiest puppy ever! We started with her because they loosened right up and got super comfortable with the camera after that.”

Says Elle, “They found houses number 107 and 109 that they wanted photos with because their wedding date is October 8. (10.8) So it was right in the middle. So creative and so well thought out.”

“Now come the giant balloons, bubble gum, and goofy faces. They had so much fun together and enjoyed making us laugh while we took their pictures.”

“Because it was the middle of fall we couldn’t help but have them play with some leaves and they loved every minute of it.”

“We had Ashlynn and Danielle lay under a tree while we climbed up for a super cool shot. Turns out thats one of my favorites.” 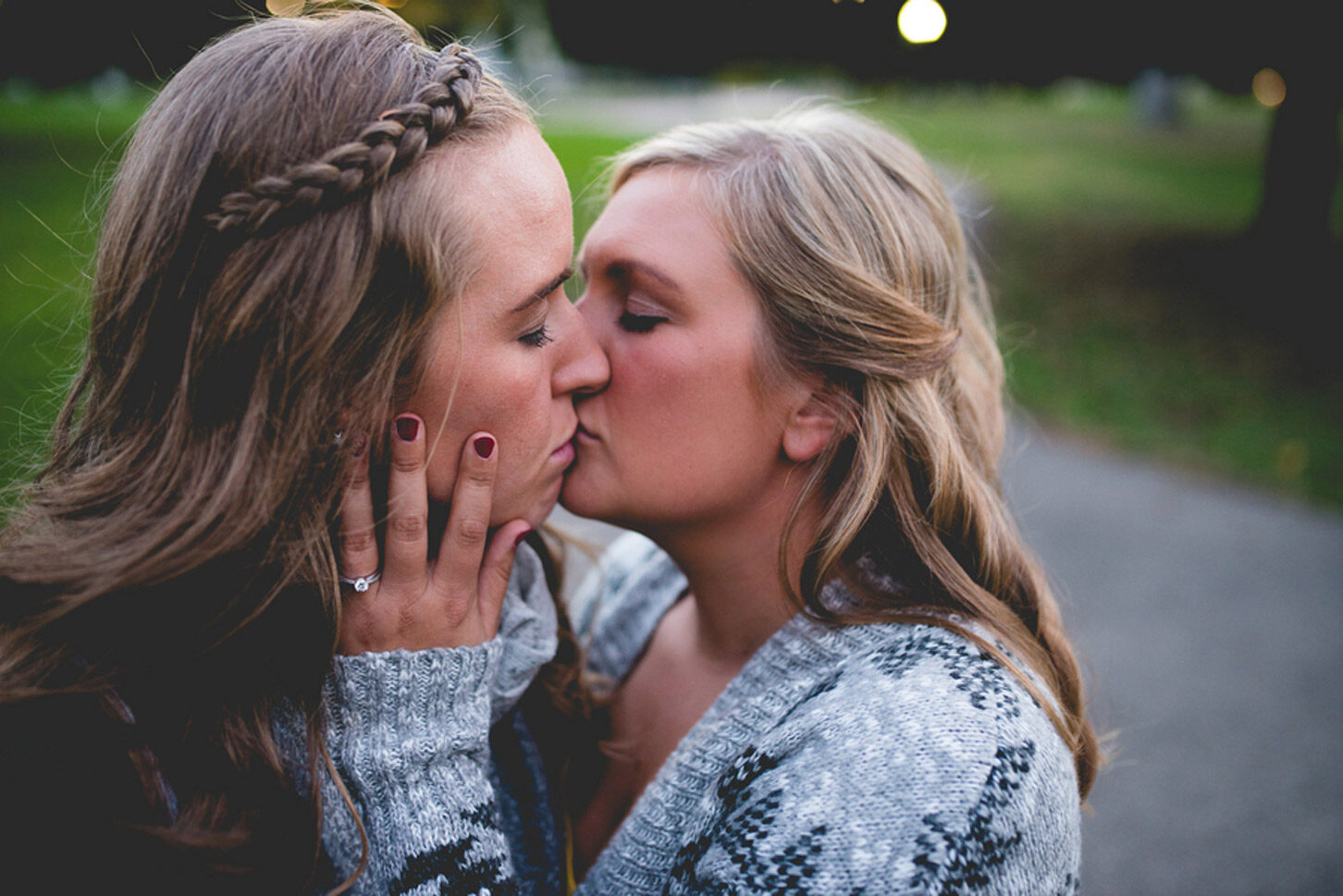 Okay, this sounds like a no-brainer, but if you’re about to say “I do” to the woman you want by your side for the rest of your life, then you’ve already

Jessica & Sarah met seven years ago when Jess was hired at the store where Sarah worked. Says Sarah, “I was her Manager and was not “out,” but there was

Emma and Sandra met five years ago when Emma started teaching at the school where Sandra had worked for five years. Says Emma, “We shared common interests in our passion for