Caitlin and Michelle met a little over three years ago on Match.com. Michelle was living in Columbus, Ohio and Caitlin in Pittsburgh, Pennsylvania. Caitlin drove three hours for their first date. “My friends thought I was insane!” She also admits that the moment she met Michelle, she knew this was something special. The two spent the entire weekend together. “It was like we had known each other for years.” After nine months together Caitlin decided to move to Columbus. “It was the best decision I have ever made. I cannot imagine life without this girl.”

Michelle: I planned for a couple months to propose on December 17th 2015. I sorted through some options on the where and the how but settled on our patio, where I thought we would feel the most comfortable. I wanted the proposal to be simple but romantic and thoughtful as well: Lights, music, champagne and a way to display our story. I printed out over 70 photos of us through the past 3 years and bought flameless candles. The pallet was a perfect way to display our photos and the chalk board would showcase our timeline of major events.

That week I was a nervous wreck but tried to stay composed. I needed Cate to get her nails done and agree to dress nice for our dinner date. Doing that without too much pushing wasn’t easy.

Caitlin: I got home from work and changed for a date night at our favorite restaurant, which is right around the corner from our house. We headed to dinner out the front door. Prior to dinner Michelle made it clear she was paying and insisted that I leave my wallet at home, but when the bill arrived she said she had forgotten the card she wanted to use. She told me she was going to run home to grab it and that she would be right back.

Michelle: That day my emotions were all over the place. I had to put the patio together in enough time to hide the trail of evidence. The realization would kick in every once in awhile that I was asking her to marry me that night! I was excited and nervous.

Caitlin: After Michelle paid and we headed home, she pulled me towards our back patio and handed me a card. I immediately began to cry and realized why she had darted out of the restaurant. Our back patio was decorated with candles, photos, a fire pit, and our favorite songs were playing. It was breathtaking.

Michelle: Leading her to that patio my heart was pounding (I’m surprised she didn’t hear it) then it all fell into place when I handed her a card saying ‘Take the world with me’ and opened the patio door.

Caitlin: She got down on one knee and asked me to marry her. It was the most beautiful night I have ever had. It was exactly what I had imagined and more – intimate, private and perfect. Michelle used her artistic skill to create this pallet with photos and memories. 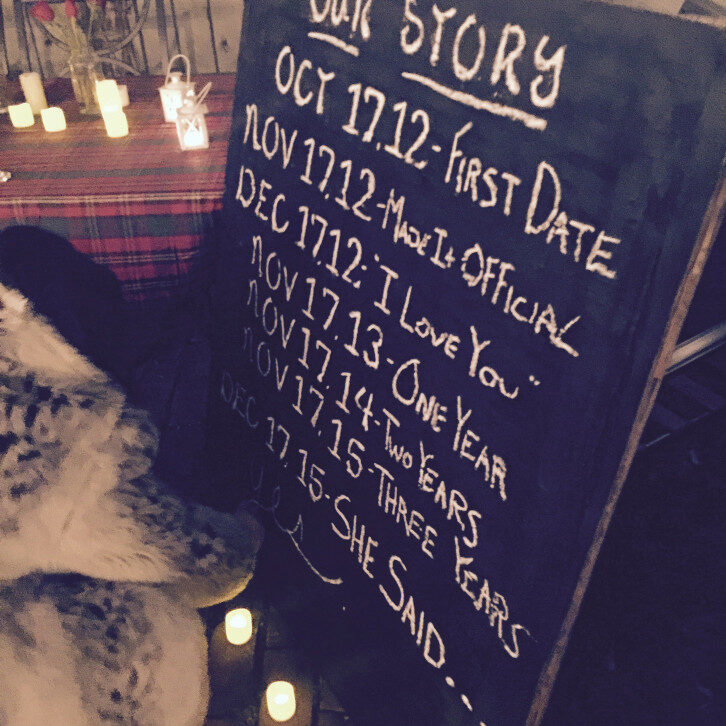 Caitlin signed the bottom with a “Yes!”

The couple collaborated on the ring. Says Caitlin: “I picked out the natural diamond and Michelle worked with a shop on etsy to put it together.”

December 13th 2014 Chicago, Illinois Robyn & Michelle met in 2009. There was an instant attraction, but the timing wasn’t right. The two decided to focus on building a strong friendship

Kate and Ajay met online on New Year’s Eve nearly two years ago. Ajay had recently moved from Los Angeles to Chattanooga, TN and Kate was planning a move there

MG Hair and Makeup is the nation’s award-winning, premier on-site hair and makeup service. They bring the expert to you, arriving at your door with the tools and products to achieve