First Person: I Kissed a Girl

The first time I kissed a girl I was sober. I was also in a frat house. My best friend and I were at a frat where the guys were generally nice, music was loud, and there was always plenty of free beer. It was the perfect place to start our night, but as freshmen we had not yet acquired a taste for beer. It was too bitter and usually lukewarm.

We were standing around the keg trying to gag down a solo cup of half foam and half beer—we still hadn’t perfected the art of pouring—complaining that we couldn’t see a drop of liquor in the place. One of the frat brothers overheard us and mentioned a bottle of vodka in the freezer. Jack Pot!

As freshman she and I had very wild west attitudes. We carried around empty flasks so we could fill them up with other people’s liquor. While at parties we frequently dropped Ramen Noodles, Goldfish crackers, and entire cans of soup into our bags. Some mornings we would wake up with new DVD’s, books, bottles of Advil, and one time a man’s electric razor. The fact that someone was offering up his “good” vodka to us was a real treat. I use the word “good” loosely here. It was Burnett’s vodka, which I now know to be garbage, but at the time was a considerably large jump from Aristrocrat, which I believe is 45% rubbing alcohol.

We both turned up the charm and began complimenting his frat as we inched our way towards the kitchen. Just as our new favorite frat brother was setting up shot glasses one of this roommates shouted, “Hey man! That vodka’s mine! You can’t just give it to those girls! I don’t even know them.” As annoyed as I was, I understood this guy’s perspective. Guys in college give away so much alcohol to girls, often getting nothing in return.

“Hi I’m Sam,” I screamed across the room. “We come here a lot and think your house is awesome.”

“Come on man,” our favorite frat boy begged, “we’ll just have one shot.” The owner of the vodka walked into the kitchen, shook our hands and introduced himself.

“Ladies,” he said, “I’ll make a deal with you. You guys kiss, just for a few seconds, and I’ll give you as much of the vodka as you want.” I know this seems like an obvious time for us to grab our things and be on our way, but you have to understand a few things: One being that this vodka is a hot commodity and something that could fuel a really fun evening. Also, she and I were in a real party monster stage in our lives and loved having stories to tell. We looked at the vodka and then at each with that “come on, we got this” face and told the guy he had a deal.

Before I can say another word, we were being pushed onto a “stage” in the living room. I use the word stage loosely, it was just pieces of plywood hammered together about three feet off the ground. (This was the same “stage” that just a few months later one of our friends would fall from and tear her meniscus.) We were on the stage surrounded by a large group of frat boys chanting “Kiss, kiss, kiss!”

I suddenly felt panicked. My armpits were sweating, and I could feel my pulse pushing out of my throat. She looked at me, also panicked, then at the crowd, and without warning she leaned in and we were kissing. It happened all at once and in total slow motion. There was tongue. I was thinking about how soft her lips were. I heard cheering. Before I could open my eyes she hopped off the stage and was ushered into the kitchen with a group of guys. I was frozen. What just happened? Why did my veins feel hot? Was I flushed? I was light headed. I’d kissed plenty of guys, but it had never felt like this before. I wanted to try this again. Immediately.

I told myself it was just the adrenaline from the crowd. I was supposed to be rushing a sorority in the fall. There would be no time to toy with kissing girls. I hopped off the stage and walk into the kitchen where she stood, grinning, and handed me a shot.

“We’ve earned it,” she said. I smiled and quickly knocked back the first shot, then continued to pour hoping to forget whatever feeling it was that still lingered. 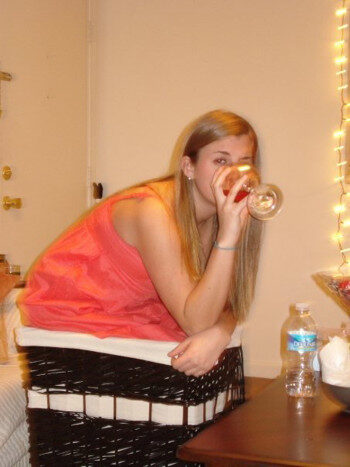 Samantha during her college years.

Colleen and Michele met on an online dating site. Say the brides, “Being two New Jersey girls we had plenty to talk about, but we never ended up meeting.” Colleen

Laura Leigh Abby is the founder of 2Brides2Be and feels it only fitting to show you some highlights from her own wedding. “Though our wedding has been featured in a few