Australians Ashlee and Kate met online about four years ago. Says Kate, “I was browsing a women’s dating site—without a profile picture, because I wasn’t out yet—and a friendly message popped up from Ashlee. When I saw her pictures, I thought she was a stunner! I raced home every day to check my messages from her.” The two finally met for dinner and stayed until the place closed. They couldn’t wait to see each other again. Says Kate, “We continued to date until Ashlee finally gave me the ultimatum to come out because she didn’t want to be with someone who wasn’t comfortable with their sexuality. I did it an hour later, and two hours after that she was having lunch with all my family. I knew she was a keeper.”

Kate and Ashlee got engaged during a beach vacation. The couple had hiked up a cliff with champagne and as they watched the sunset Kate presented Ashlee with a ring and proposed. The brides planned a relaxed and heartfelt ceremony and celebration at a winery. Both brides were escorted down the aisle. They both wanted to walk first so they could watch the other walk, but in the end Kate agreed to go second. Ashlee, escorted by both her father and stepfather, waited “a while” for Kate. Says Kate, “Ashlee says it felt like a long time, but I was just building anticipation.” Though they spent the night together before the wedding, they separated in the morning and didn’t see each other’s dresses until the ceremony. “It was a very special and emotional moment.”

The brides’ moms signed their commitment certificate, but because same-sex marriage isn’t yet legal in Australia, their celebrant has saved a place in her registry for them.

Says Kate, “We realized at the wedding rehearsal we needed two songs because we had such a large bridal party to walk down the aisle. I chose ‘1000x’ because it was one of my favorites and the lyrics “I would do it again, oh a thousand times” describes how I was feeling. When Ashlee hears the song now, she gets emotional with the memory of the moment.”

The brides opted out of a first dance because they didn’t want the attention, and preferred to have family and friends join them on the dance floor.

Kate’s Favorite Moment: “We went into a field at sunset to take photos, and our photographer told us to lay down together so they could capture the stunning backdrop of the hills and the setting sun. Our photographers told us to kiss, and I think we may have had a few champagnes by then and were taken away in the moment. The photos are a little steamy.”

Ashlee’s Favorite Moment: “Watching Kate walk down the aisle, and dancing all night on the deck. It was a warm, balmy night and we selected a feasting table and cocktail style wedding so our guests would be dancing all night. As the sun went down, the backdrop of the hills and wineries was so stunning that I felt euphoric. Everyone’s ears were ringing at breakfast the next day but guests still tell us it was the most fun wedding they have been to all year.”

The brides say that their venue—a vineyard in the Yarra Valley—allowed them an outdoor reception on a deck overlooking the rolling hills. “It was hot earlier in the day when we were getting ready, then a calming breeze started to come in right before the ceremony. It couldn’t have been better.” The brides add that they had such a blast that they didn’t want to leave, and their advice to other couples is to “worry less.” 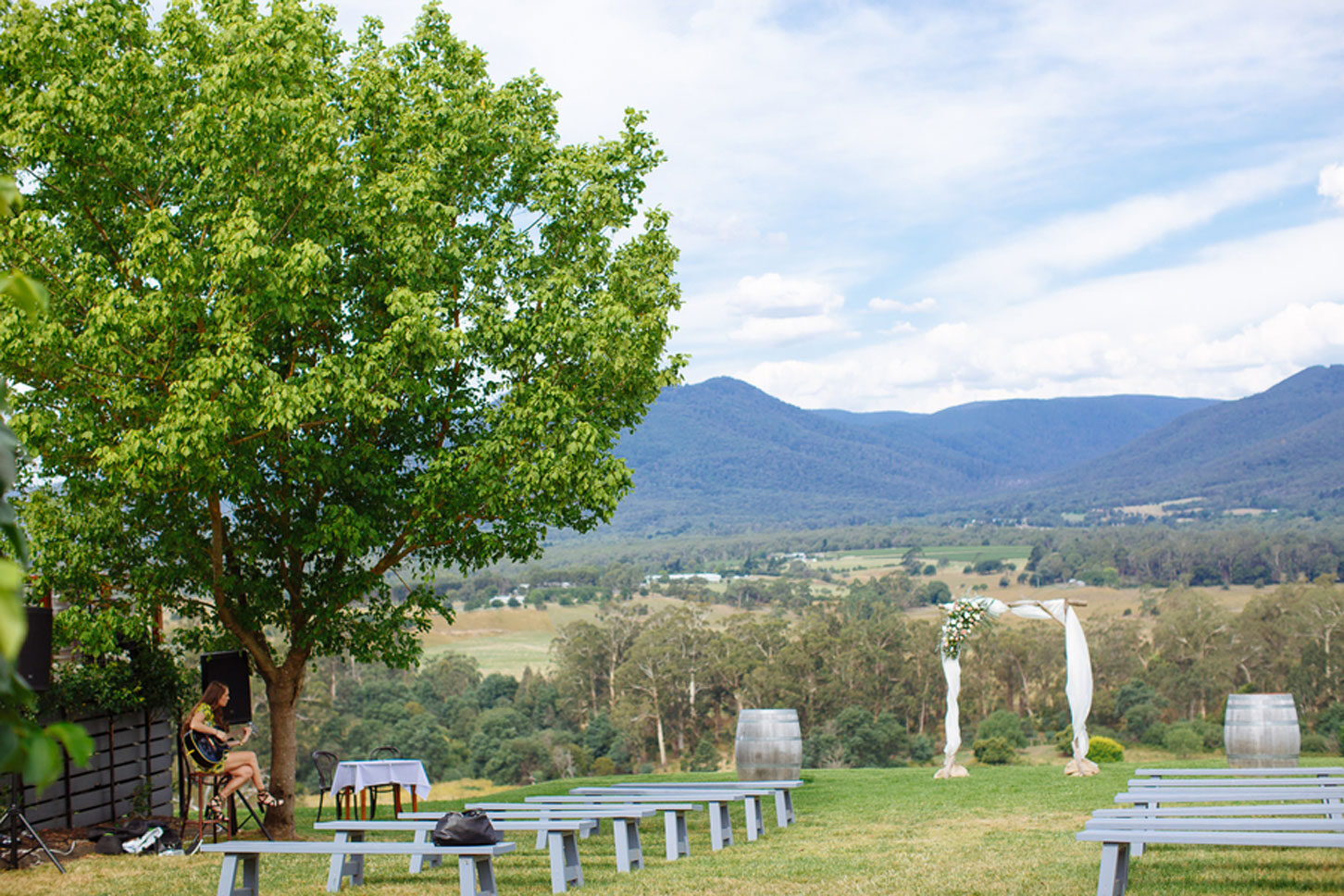 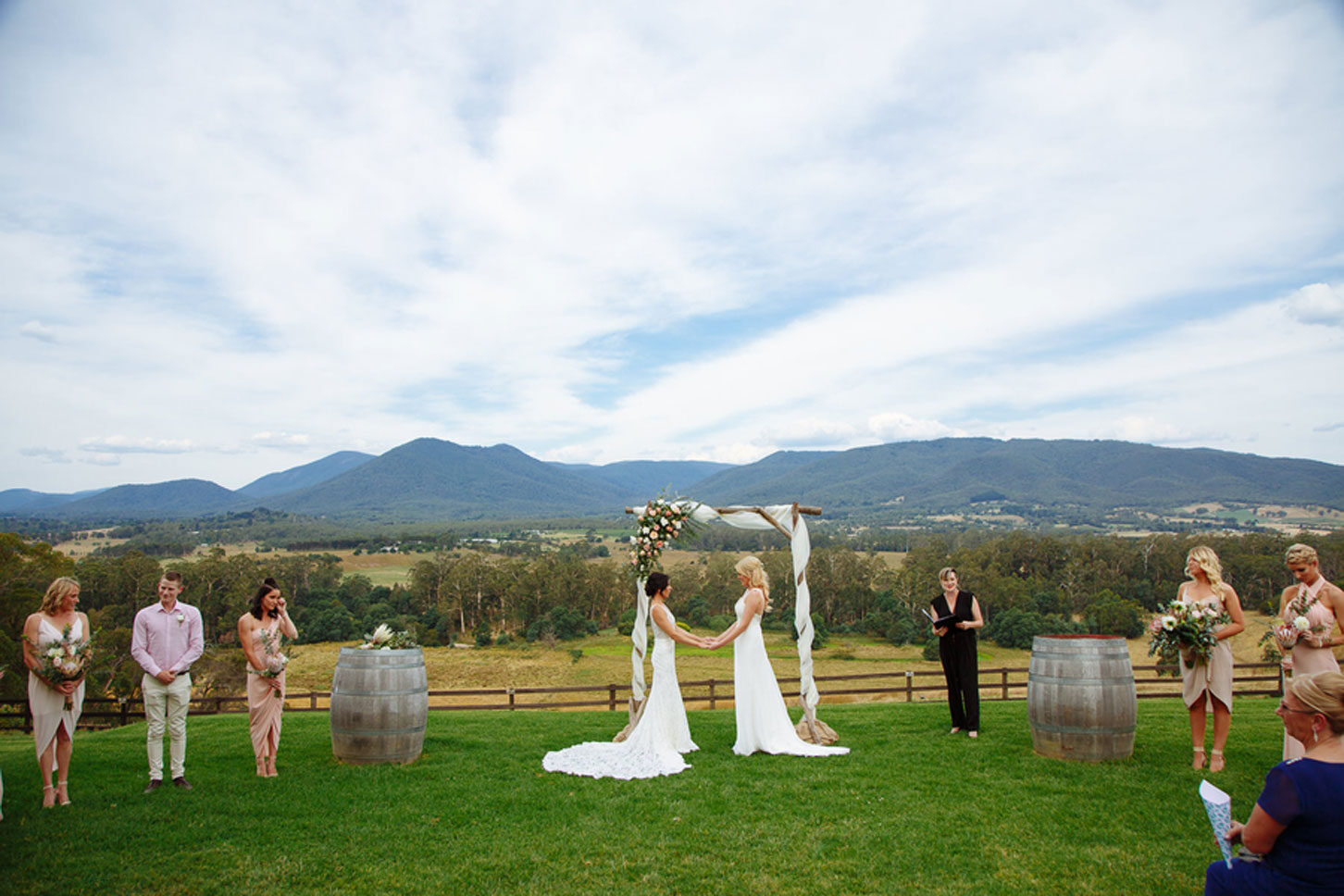 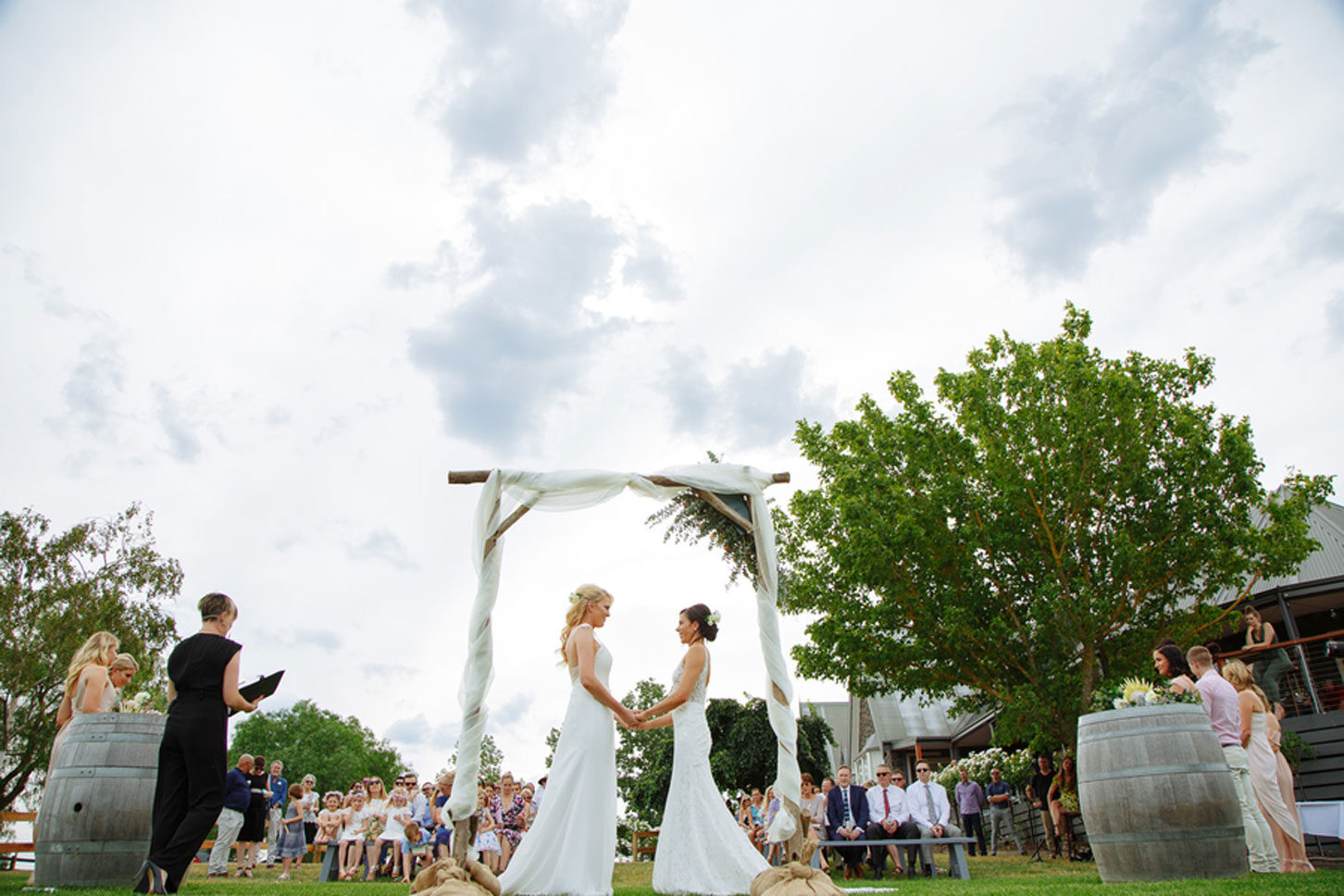 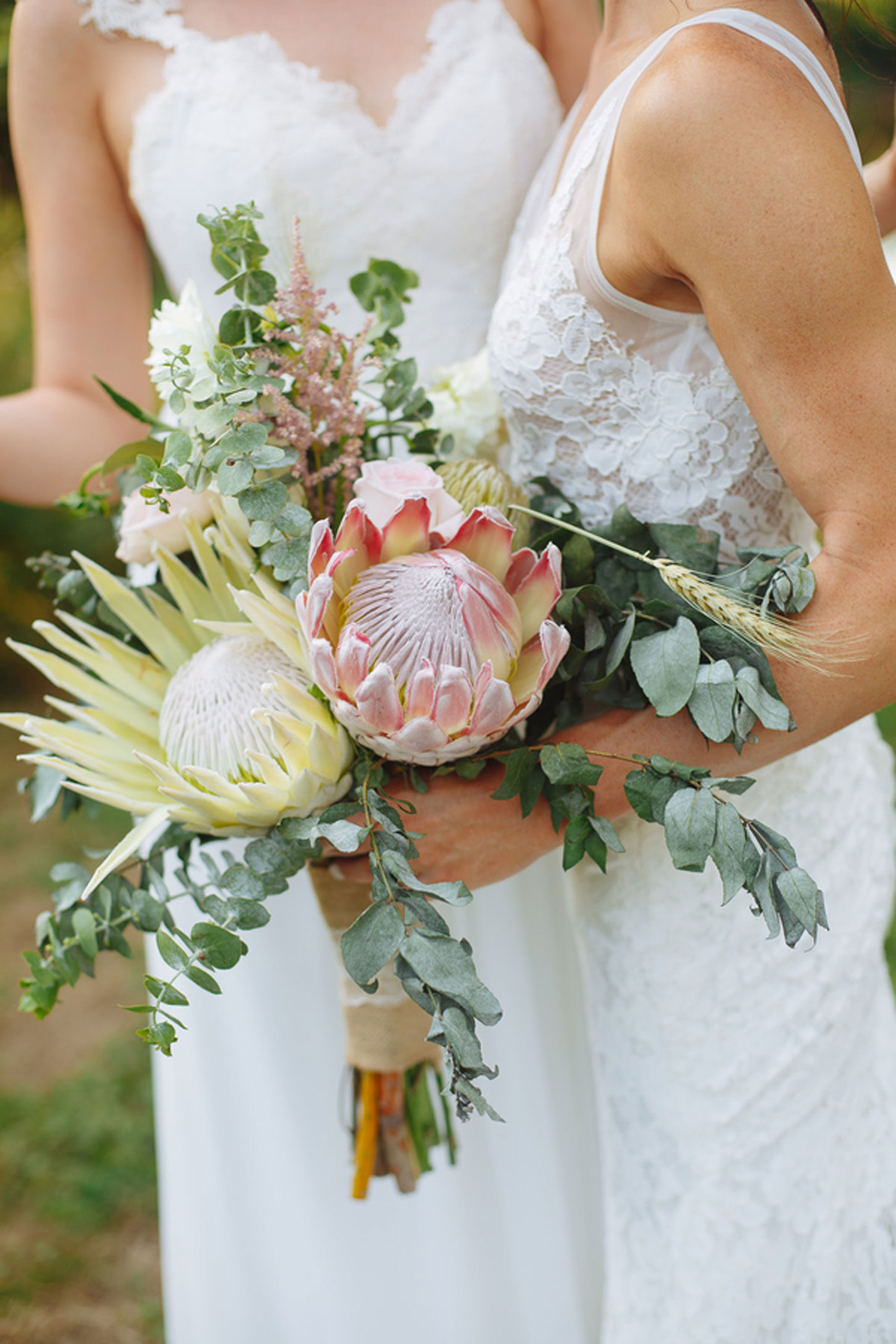 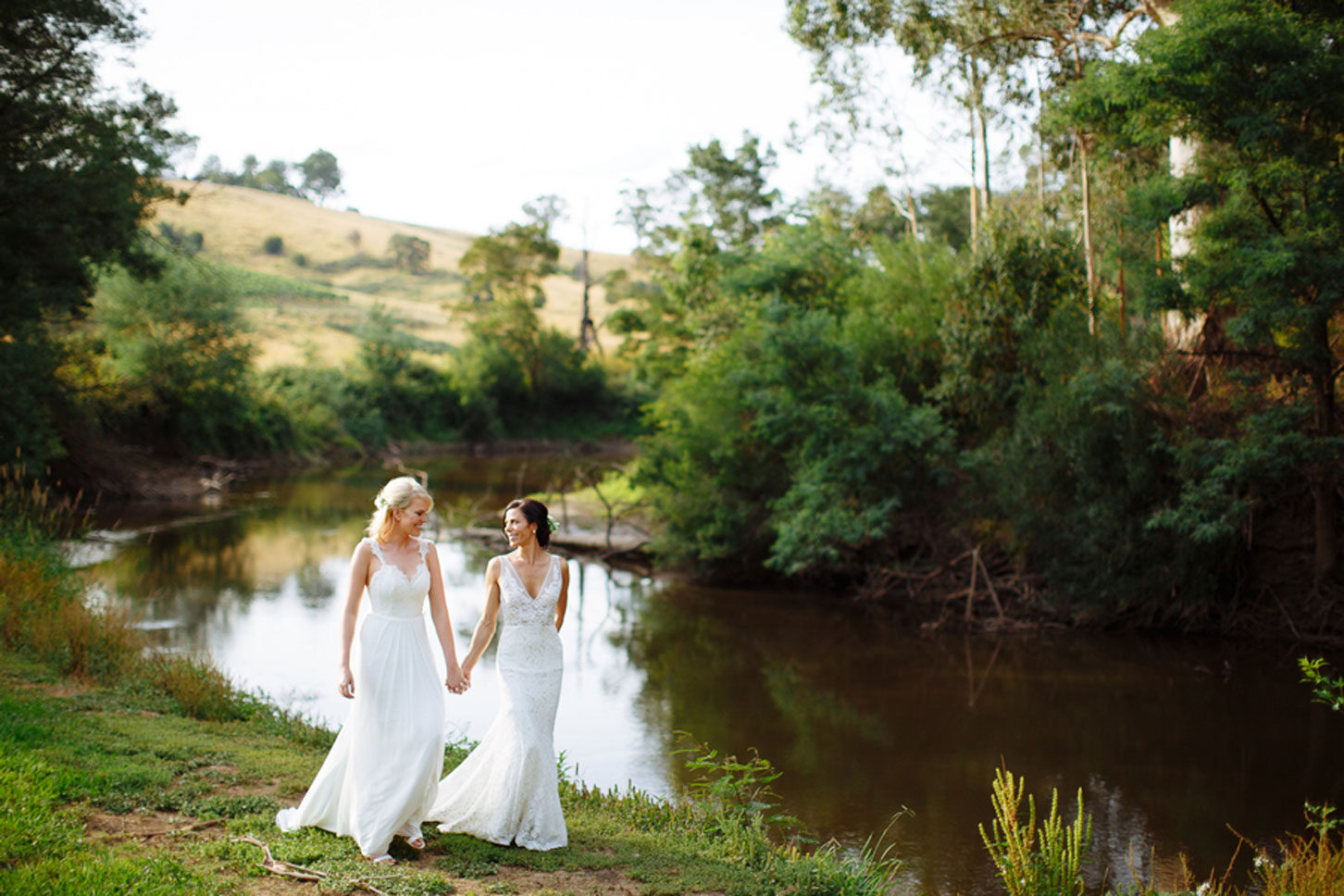 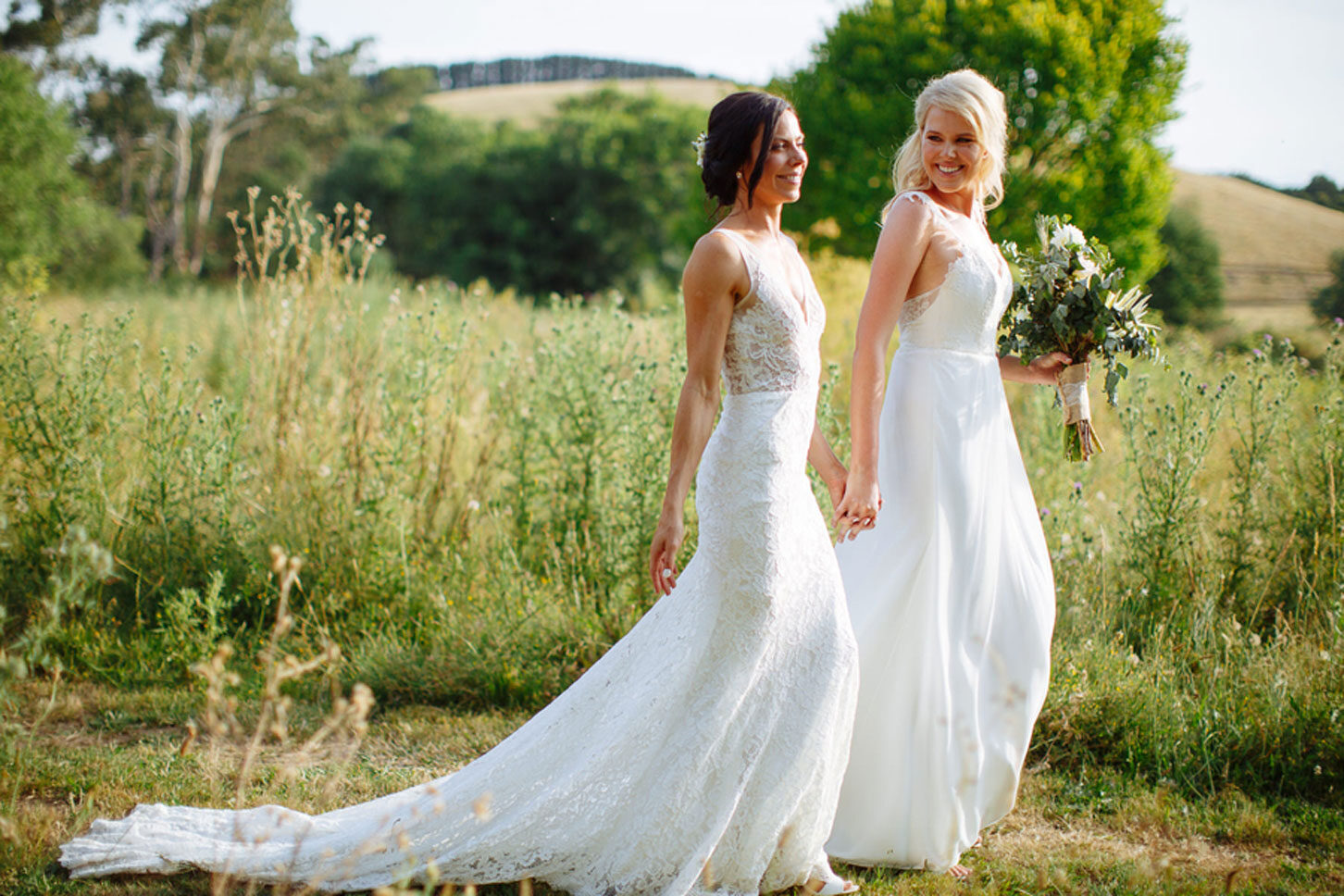 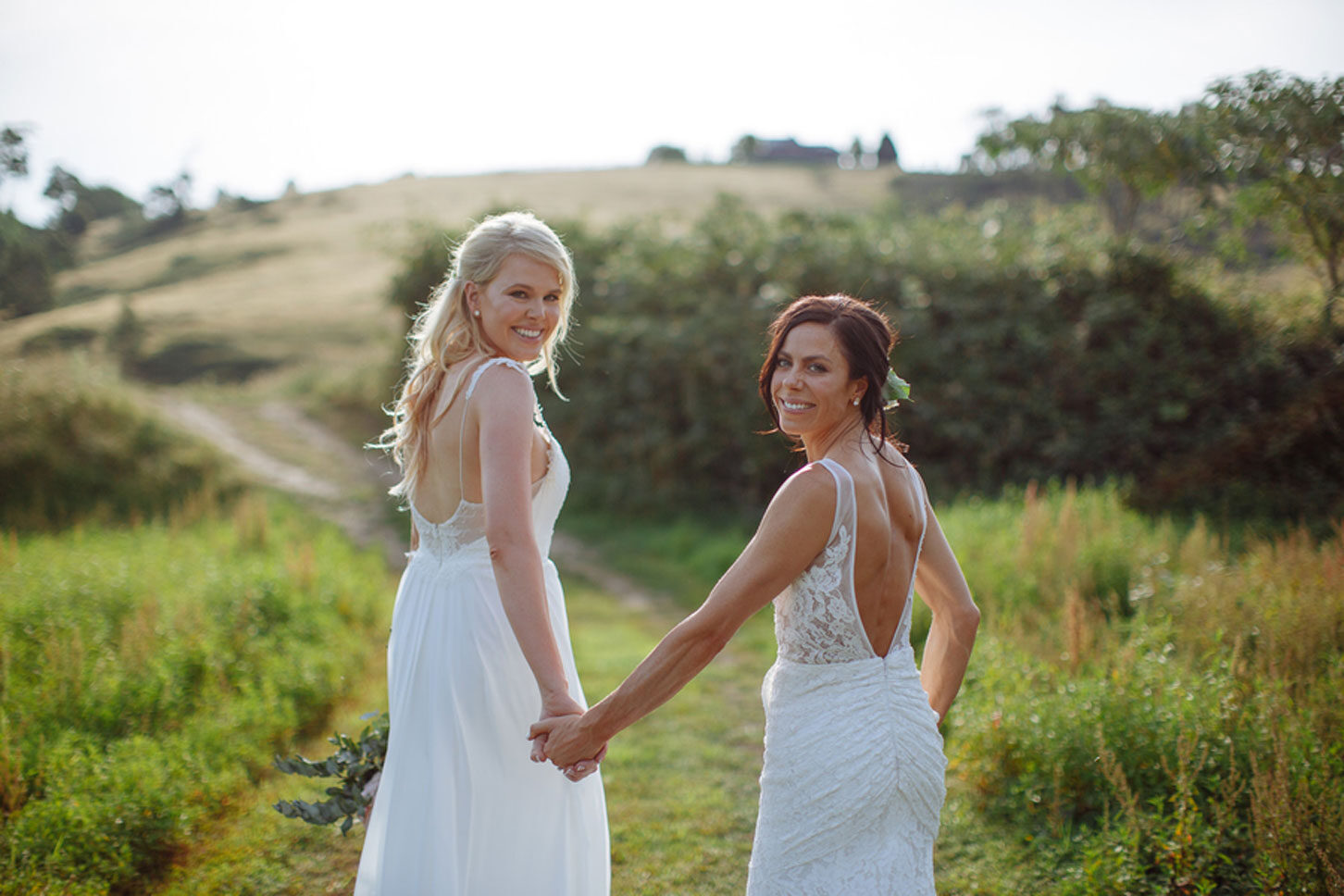 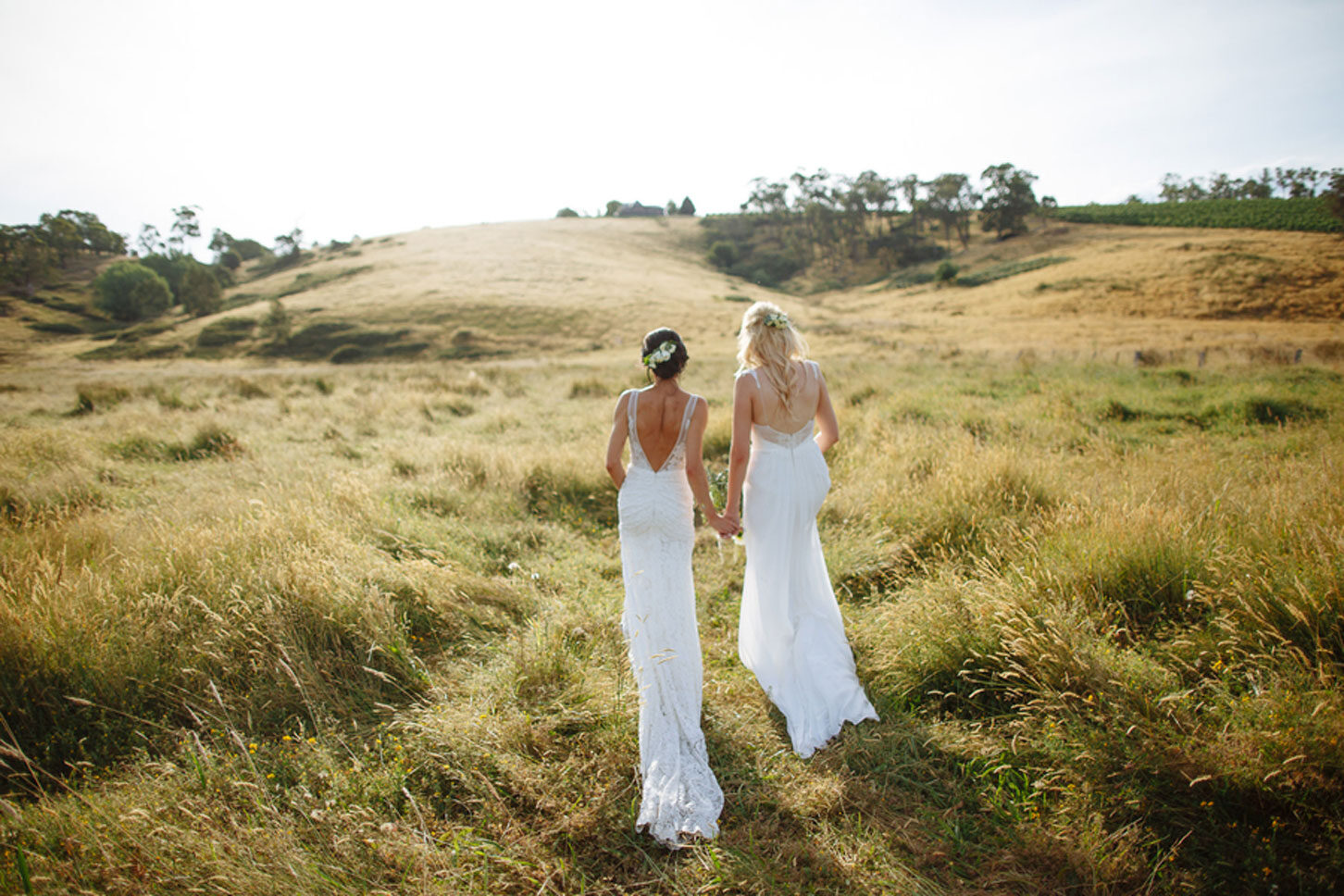 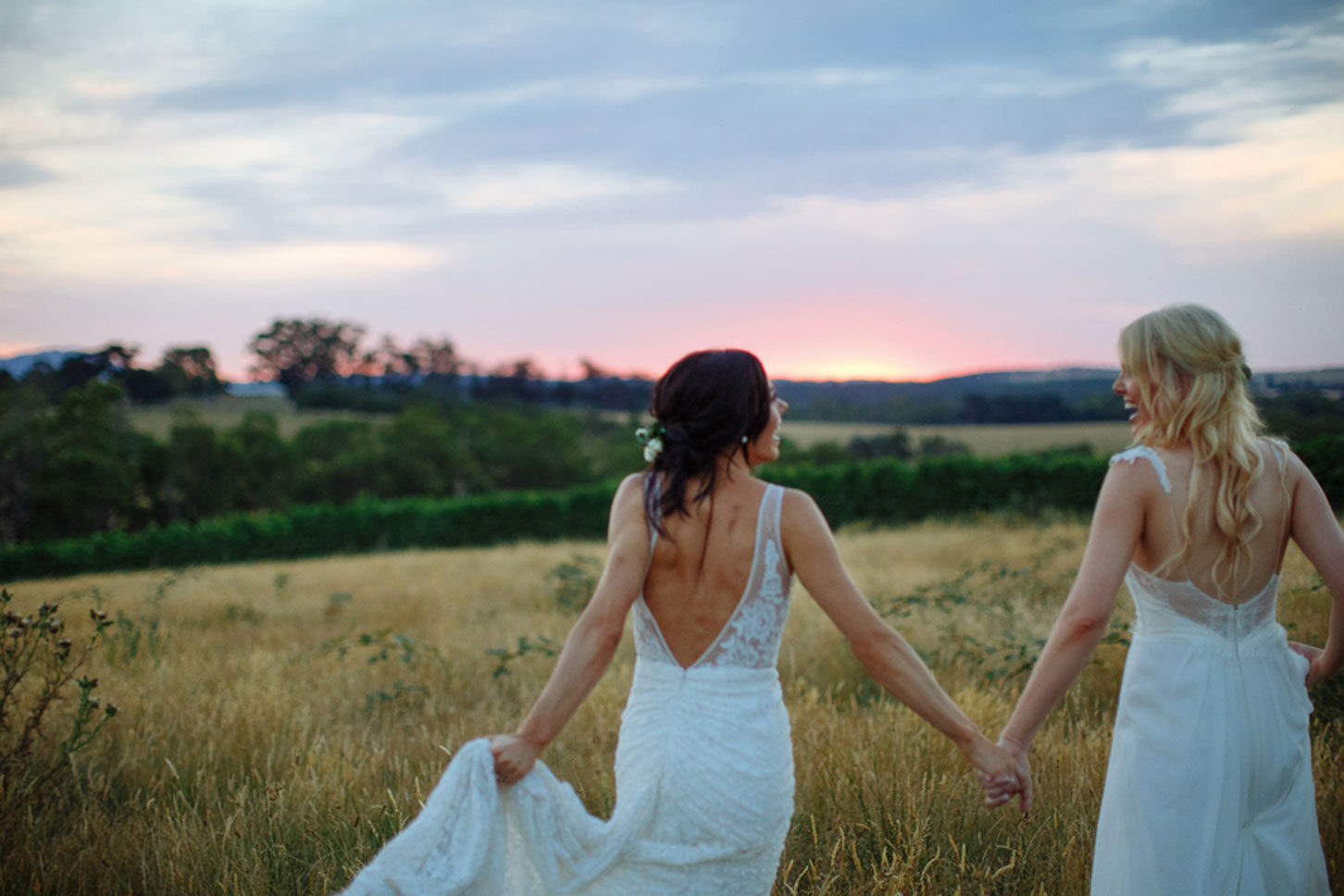 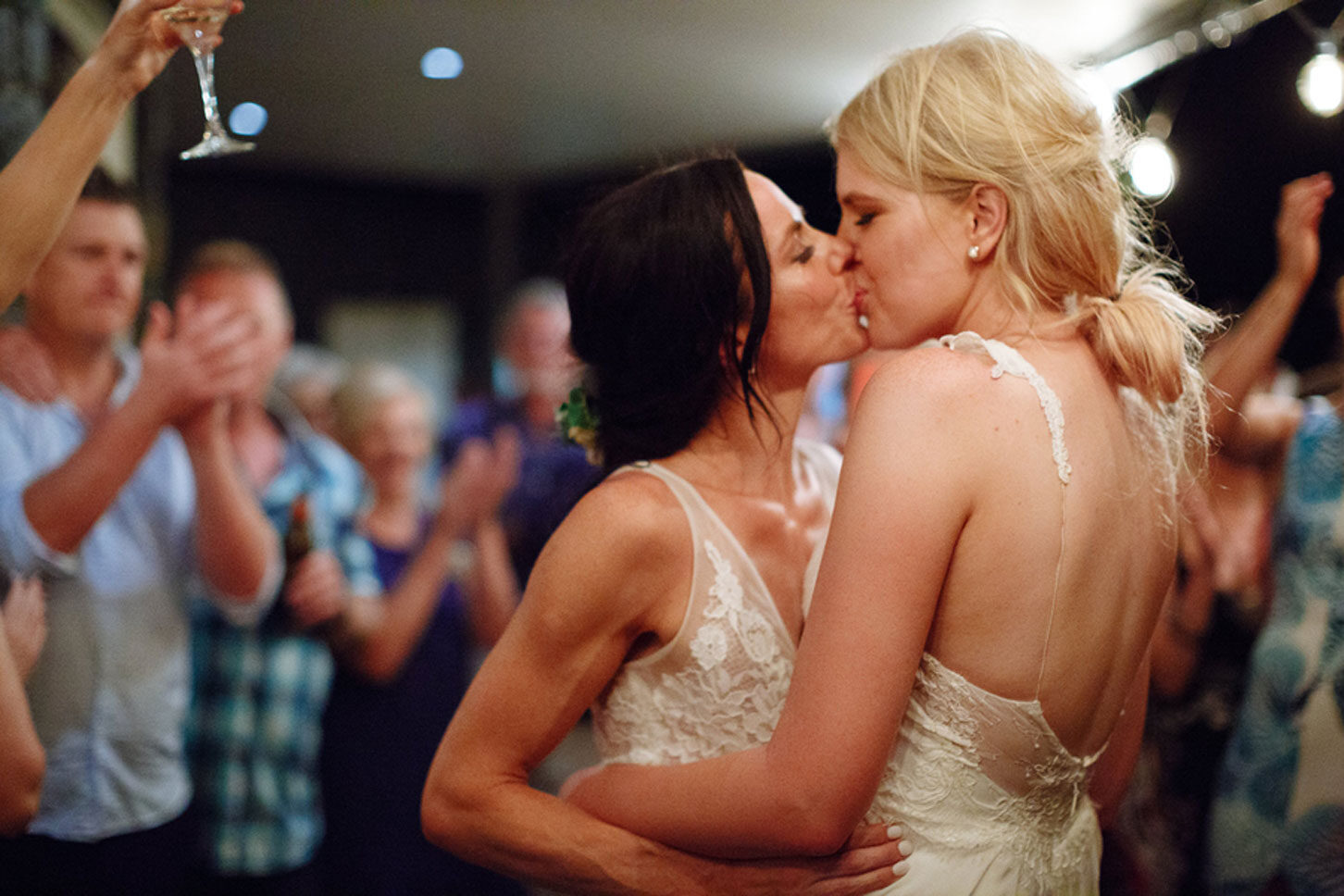 Cheyenne and Jessica met about six years ago while dating other people, but say that they “had similar values and senses of humor, and hit it off right away.” They

Anna & Shelly, who shared their rad destination wedding with us, have been married over two years now, and the couple has learned a thing or two about how to

May 23rd 2015 Canandaigua Lake, NY Kelli spotted Maggie while out with her friends in Provincetown, MA over Memorial Day weekend 2011. The two had mutual friends and although Kelli